The spiritual figure of Guanyin represents compassion, kindness, love and mercy. The bodhisattva “perceiving the cries of the world” originated in the Sanskrit as ‘Avalokiteśvara’ and soon became a respected figure within Taoism, Buddhism, Chinese folk religion and many more. 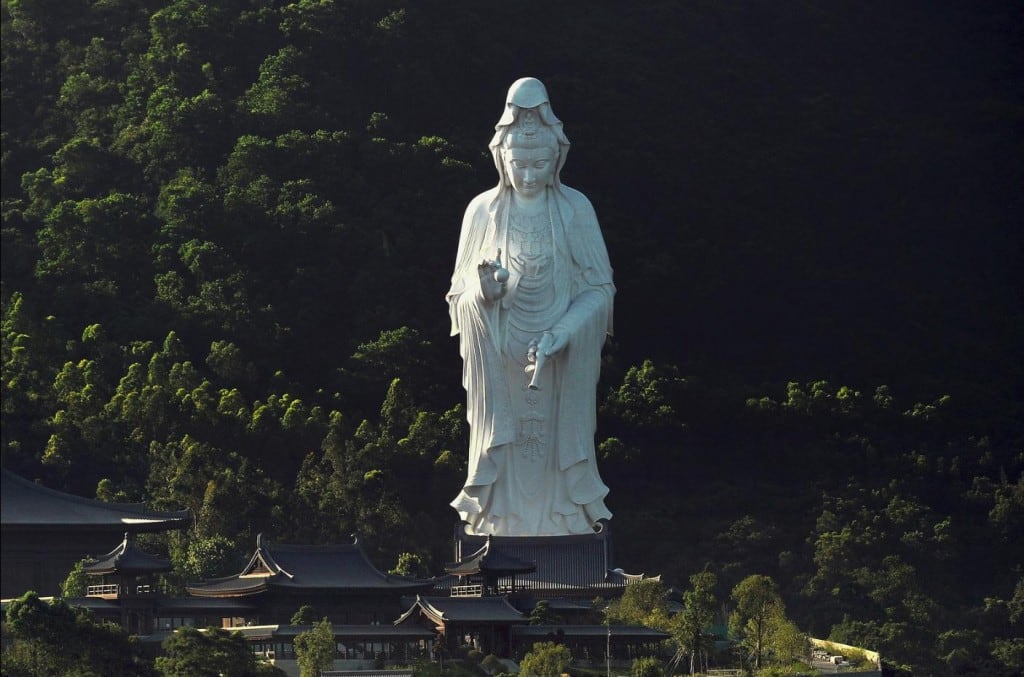 Introduced alongside Buddhism, the story of Guanyin reached China in the 1st century and travelled to Japan and Korea around the 7th century. The first representations of the deity, like those of all other bodhisattvas, were masculine in appearance. However, later depictions often merge male as well as female attributes before, around the 12th century, the figure became mostly female. To this day, believers conceive that Guanyin has the ability to change her appearance to whichever form required in order to relieve suffering; and, indeed, no other figure in Chinese Buddhism seems to be represented in such a variety of forms.

Guanyin’s main intention and purpose is to rescue and free all beings from suffering. In her striving to do so, she is often accompanied by a number of different symbols from “a thousand” hands, eyes and heads to a jug of water, the dew of compassion, which is believed to have the power to remove suffering, purify body, speech and mind, as well as lengthen life. Many representations of Guanyin (such as the above soapstone figure with a wooden stand at Timothy Langston Fine Art & Antiques) include a lotus flower, out of which she is said to have been born. This flower represents harmony, purity and peace.

A 19th Century Qing Dynasty Guanyin Seated Upon an Elephant

Other times she is depicted riding an elephant (see the above porcelain figure) or a fish, signifying her omnipotence. The Buddhist prayer beads around her neck are also a common symbol. Each bead of the necklace represents all living beings and turning of them is said to lead each and every one of them out of their individual state of misery. Though her props might change, most depictions agree to a barefoot, graceful figure in flowing ropes and a draped hood.

While other bodhisattvas entered Nirvana, Guayin chose to stay on earth to relieve suffering, illustrating her empathy for human kind. Hence, Guanyin, the symbol of beauty, is loved by the Chinese rather than feared.

At Timothy Langston, we are most taken by the progressive notion that gender is irrelevant in the pursuit of enlightenment and, other than with The Virgin Mary to whom Guanyin is often compared, the caring, empathetic element is not restricted to any one sex or being.